The Society is delighted to welcome the well known writer on music Terry Barfoot who is going to do an audio visual presentation on the music of Anton Bruckner.  He was arguably one of the greatest symphonists of the nineteenth century and his symphonies are now rarely out of the repertoire.  They are large in scale however and so presenting them to the Society has been a challenge.

Terry runs Arts in Residence which are residential weekends with a musical theme.

The next meeting of the Society will be on Monday 20 March starting at 7:30 as usual and will a presentation 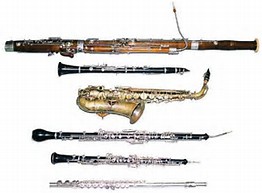 by Ed Tinline on the development of woodwind.  He will be playing a selection of pieces including wind soloists and also ensemble playing.
The committee will be meeting immediately prior to the main session.  If members reading this have any points they would like the committee to consider, or you might be interested in presenting or co-presenting a session, please let one of the members know.

The solo violin in classical music

This was a presentation by Salisbury violinist Frida Backman on music for the solo violin.

Perhaps the first thing to say is that there isn’t that much for the solo instrument.  Beyond Bach one might be stumped to think of many solo works and although Kodály was mentioned and later his fellow Hungarian Bartók, apart from a few virtuoso performers, there are not many works of note.  There is of course a huge repertoire of accompanied violin music and concertos.

The instrument was developed into what we see today in the sixteenth century in Cremona, Italy and one of the first masters was Amati.  The instrument consists of no less than 70 parts.

Frida started with some early works by Nicola Matteis who was a violinist in the early eighteenth century and who composed pieces more advanced than his contemporaries.  We then heard a piece by Tartini also of this era, and who was influential in teaching the instrument and wrote a treatise which may have influenced Mozart’s father.

The composer of a large amount of solo work was JS Bach and we heard several pieces by him including an arrangement by Fritz Kreisler in a 1904 recording of a partita with a piano accompaniment.  We also heard pieces by Biber, Prokofiev, Ysaÿe, and Ravel’s Tzigane composed in the early ’20s.

A brilliant virtuoso of the early nineteenth century was Paganini who’s phenomenal abilities were said to derive from the devil.  He was hugely successful and owned no less than 11 Stradivari violins.  Two of his caprices were played, numbers 23 and 24.

Frida explained that development of the bow was crucial to the instrument’s success.  As music moved out of the salon into the concert hall, more power and volume was needed and the modern bow enabled that to be achieved.  However, many players still use a baroque style bow to achieve greater authenticity and Frida played two CDs of the same piece to illustrate the difference in tone.

Frida ended her presentation with a live rendition of a piece by a modern composer Zura Dzagnidze called Intruder composed in 2005.  This she played against a backing track with herself.

A most interesting evening exploring the history of this most versatile of instruments.

The next meeting of Salisbury Recorded Music Society will be held tonight, Monday 6 March 2017 at 7.30 in our usual venue, when Frida Backman will be presenting The solo violin in classical music.  Please feel free to bring a guest or friend.